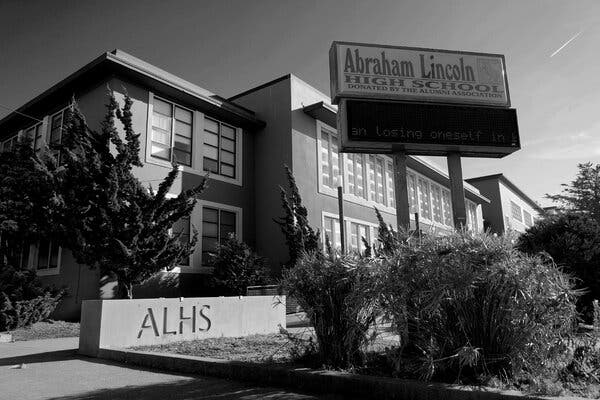 This week, the San Francisco School Board of Education voted 6 to 1 to proceed with a plan to rename 44 of the city’s currently shuttered schools, wiping away notables like Abraham Lincoln, George Washington, Paul Revere, Robert Louis Stevenson and even Dianne Feinstein, California’s senior senator, for various forms of cooperation with white supremacy and patriarchy.

After the vote, I spent some time reading the Google spreadsheet helpfully compiled by the renaming effort, which listed the justification for each erasure: for Washington, slave-owning; for Revere, helping to command a doomed Revolutionary War military operation on the Maine coast that nonetheless supposedly contributed to the “colonization” of the Penobscot tribe; for Stevenson, writing a “cringeworthy poem” that includes words like “Eskimo” and “Japanee.” (It may not surprise you that some of these justifications, often pulled from Wikipedia, included significant errors of historical fact.)

As interesting as the spreadsheet, in its way, was the displeased statement from San Francisco’s mayor, London Breed. Though there was liberal opposition to the renaming project, the pressures of the mayor’s position apparently made it impossible for her to argue straightforwardly that Abraham Lincoln still deserves to have a school named after him. Instead, her ire focused on the fact that the school board is busy renaming schools when it hasn’t actually found a way to open them: “What I cannot understand is why the School Board is advancing a plan to have all these schools renamed by April, when there isn’t a plan to have our kids back in the classroom by then.”

On one level, this objection is reasonable; on another, though, it misses what’s been happening in America over the last year. It is precisely because the city’s public school classrooms are closed, precisely because normal educational tasks and interactions have been suspended, that radical projects find themselves more easily and naturally fast-tracked. If there’s anything we’ve learned about pandemic life, it’s that suspense of ordinary life creates a vacuum that ideology rushes in to fill.

For the last month, we’ve been focused on the particularly poisonous way that’s happened on the American right: how the online drama of QAnon and its stepchild #StoptheSteal became powerful enough and immersive enough to help inspire a riot at the U.S. Capitol. Yes, QAnon predated the pandemic and Trump would have claimed voter fraud no matter what. But the pandemic months still felt like they worked a fundamental change on many conservatives’ relationship to political reality, pushing normal people deeper into certain kinds of very-online fantasy.

What’s happened on the far left is somewhat different. The right’s pandemic-era dreamscape reflects a fear of growing powerlessness, with paranoia about malignant and all-powerful elites coupled with a fantasy of eucatastrophic victory. The left’s pandemic ambitions, though, are all about using newfound power to transform institutions in which their influence has been increasing. That makes them utopian but not fantastical, extreme but not a fever dream.

For instance, the San Francisco school board’s grasp of history may be shaky and its history-erasing ambitions radical, but it really does have the power to carry out a school-renaming project or a dramatic curricular review or any other step deemed necessary to instantiate the new era of awokened liberalism.

No other progressive city is quite like San Francisco and there are lots of political impediments to things the far left would wish to do. But there is still a programmatic ambition that unites activists trying to play ideological commissar at universities with activists trying to defund the police with activists trying to get Washington and Lincoln canceled. The goals in each case are all things you could do, under certain circumstances — in a way that you can’t expose a Venezuelan voter fraud conspiracy that isn’t real, or defeat a pedophile cabal that doesn’t actually exist.

So an interesting question is which sort of radicalism is more likely to persist once the pandemic is gone and semi-normality returns. Does the fantasy aspect of right-wing radicalism make it more resilient and dangerous post-Covid — or more likely to dissolve, like an enchantment after midnight? Do the more realistic ambitions of left-wing radicalism enable its entrenchment, or inspire a swifter backlash against its overreach?

Both forms of radicalism, it’s worth noting, are currently presiding over broken systems. The liberal city, in the time of a radical ambition, has been disfigured by a homicide spike and devastated by the collapse of in-person education. The Republican Party, under an ascendant conspiracism, has lost its hold on the Senate and the White House.

In a healthy society that brokenness would weaken radicalism’s appeal. In our society — well, we can live in hope.