In his recent Nautilus essay, “The Kekulé Problem,” Cormac McCarthy suggests that our unconscious mental processes are a modern…

In his recent Nautilus essay, “The Kekulé Problem,” Cormac McCarthy suggests that our unconscious mental processes are a modern echo of the prelinguistic minds of our prehistoric ancestors. He sees a stark contrast between language as a fairly recent cultural invention and the unconscious as an ancient biological system; the two are made from entirely different cloth, which is why, according to McCarthy, the unconscious is “loathe to speak to us.” It is “just not used to giving verbal instructions and is not happy doing so,” preferring to communicate with our consciousness in images and metaphors.

As a linguist, I don’t think I quite agree with the renowned novelist’s characterization of the unconscious mind as fundamentally non-verbal—which I guess is Canadian polite-speak for: Wow, I really don’t agree with that at all. The unconscious mind of the modern human—after language—is inexorably altered by it. It has swallowed language up in itself (along with everything else it encounters). In fact, the vast majority of language learning and processing operates below the threshold of consciousness and not in the domain of deliberate thought. So language is truly not banished from the unconscious.

Symbols can’t be the whole story. It’s possible to get apes to learn to use visual or manual signs as symbols.

Aside from the border between language and the unconscious, much of McCarthy’s essay is devoted to the idea that language is not a product of biological evolution, but that it is a cultural development that quickly “infected” human minds once it was introduced, much as any staggeringly useful idea—like the invention of the wheel or the Internet—is bound to spread. This notion of language as a cultural virus is interesting and provocative. And quite possibly true. Certainly, in the vicinity of a modern human mind, language has this character. Language doesn’t emerge spontaneously, like arms or breasts or hair. Those whose access to language is blocked—for example, deaf children who are surrounded by people who speak but don’t sign—usually grow up with little or no language. But when these same children spend their days with others like themselves, the smallest spark of signed language flares and catches through the group as if through dry grassland. Or, if you will, like the measles.

The question is whether language spread like this through the minds of our prehistoric ancestors, leaping from one mind to another rather than evolving slowly, like a working eye. McCarthy locates a key moment in the emergence of language: the insight to use symbols to stand in for things in the world. This, he suggests, was the moment when “some unknown thinker sat up one night in his cave and said: Wow. One thing can be another thing.” 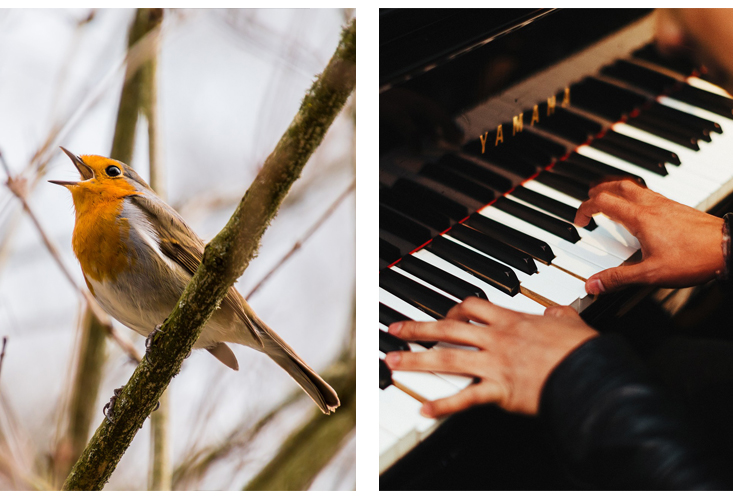 Symbols are indeed crucial to human language. As McCarthy points out, this is the difference between the alarm calls of small mammals that use different sounds to signal different kinds of predators and Helen Keller’s sudden insight that “the sign for water was not simply what you did to get a glass of water. It was the glass of water. It was in fact the water in the glass.” Or, as she would discover, the idea of water in any form whatsoever.

But symbols can’t be the whole story. With some concerted effort it’s possible to get apes to learn to use visual or manual signs as symbols—as true symbols that stand for the idea of an apple, say, rather than a gesture you make to get an apple. Still, language doesn’t infect them in the same way. Once a chimp has learned to use symbols, it doesn’t go around spreading its newly acquired insights with its fellows, whereas humans feel utterly compelled to.

As a linguist, I don’t quite agree with the novelist—which I guess is Canadian polite-speak for: Wow, I really don’t agree at all.

If language is a virus, then several qualities have allowed human minds to be infected by it, including an ability to grasp symbols and a social compulsion to share thoughts. One quality that’s often overlooked—perhaps because we are so rarely conscious of it—is our ability to trade in what linguists call compositionality. This is the way in which meaning is systematically conveyed by language structure. It’s what gives symbols such expressive power. Symbols alone allow you to convey concepts like apples or woman. Useful? Probably. But compositionality is what allows you to understand descriptions of events (Bob stole your apples/woman) or, better yet, descriptions of thoughts and intentions (Bob plans to steal your apples/woman). It’s what allows you to compute the meaning of any new sentence expressed in that language—just as, once you know how basic arithmetic operations like addition and division work, you can apply them to any new combination of numbers.

It’s possible to combine symbols in a way that’s not compositional. For example, you can join two nouns together into a compound to make a complex meaning, but the meaning of the whole isn’t fully predictable based on the parts. Think about the words houseboat, housewife, house guest, housecoat, house arrest, house lust. The same structural relationship holds between the individual words in all of these compounds, but there isn’t a uniform semantic relationship. A houseboat is a boat that is also a house, but a housewife is certainly not a wife that is also a house. While you could construe both a housewife and a house guest as living in a house (sort of), this doesn’t apply to a housecoat, which is something you use in a house. And house arrest and house lust fit none of these at all. When you meet a new compound (house book), you have to try to work out a reasonable guess. But you can’t just automatically compute its meaning with any certainty.

Cormac McCarthy is best known to the world as a writer of novels. These include Blood Meridian, All the Pretty Horses, No Country for Old Men, and The Road. At the Santa Fe Institute (SFI) he is a research colleague…READ MORE

Luckily for us, most of language doesn’t rely on this squishy method of combining symbols. Take adjective-noun combinations such as red dog, corrupt executive, long book, and broken computer: A red dog is a dog that is red. A corrupt executive is an executive that is corrupt. A long book is a book that is long, and so on. Any time you join an adjective with a noun, the adjective serves to name a property that the noun possesses. Mathematically, we could say that a phrase formed by an adjective plus a noun corresponds to the intersection of the sets of things denoted by the adjective and the noun—red dog refers to the set of things in the world that are both red and dogs. This rule holds for any combination of an adjective and noun, so that, faced with a combination you’ve never heard before, you can easily compute its meaning. Just about all of language works this way, noun-noun combinations being a striking exception.

Compositionality scales up—way up, all the way up past basic parts of speech like adjectives and nouns to really abstract notions likes subjects and verb phrases, so that the relationship between the subject and verb is identical in Sally laughed and The little red-haired girl who repeatedly rejected Charlie laughed—even though the subject in the latter sentence is itself a complex phrase that has ingested a relative clause. Like math, the same tools that allow you to generate simple equations can be used to create complex ones. And while apes can use linear order to distinguish meanings in simple phrases (Fred tickles Lana vs Lana tickles Fred), there’s no evidence that they can cope with true compositionality or deal with recursive structures like relative clauses.

Here’s the viral moment I’d plunk my money on: the moment when symbols were married to structure by socially compulsive creatures.

What’s interesting is that some species of songbirds possess an essential ingredient of compositionality—they’re able to create long song patterns by combining smaller units in ways that resemble human syntax. Human music has this quality too, and along with many parallels between the structure of human languages and the structure of human musics, there’s evidence that language and music share neural circuitry in the human mind. But birds don’t have language; what they seem to be missing is the notion of symbols. The songs of some species can be very complex, but we have no reason to believe any of it ever means anything (much like human music, sans lyrics). This is interesting—it suggests that complex mental structures didn’t necessarily come after humans figured out how to use single words, and were motivated to combine them to convey more complex meanings. They may have already existed on a separate nonlinguistic plane.

McCarthy acknowledges that in order to take hold, a virus has to find a receptive environment: “the scrap heap will be found to contain any number of viruses that did not fit.” Figuring out what made the human mind receptive is, to many who study the evolution of language, precisely where all the action is. Language seems to depend on a variety of mental components being in place. How did they get there? And, just as a species might evolve a resistance to a malignant virus, did humans evolve a receptiveness to the beneficial virus of language?

If I were a betting woman, here’s the viral moment I’d plunk my money on: the moment when symbols were married to structure by socially compulsive creatures. But I hesitate to call it a moment. The infection may have taken quite a while; quite a few humans may have been immune at first. When exposed to symbols, it turns out that a few chimpanzees do show an interest in teaching them to other chimps. I can imagine that language may have lurched along like this at first: Someone was obsessed by this symbol thing and went around proclaiming its coolness; after he died, everyone else more or less went back to what they were doing before, until some gregarious symbol-obsessed individual passed on his traits to enough offspring for the notion to truly catch on. Becoming infected by the language virus would be advantageous, hence a whole slew of qualities that made minds susceptible to infection probably did evolve over time: a desire to meld minds with others, the ability to discern patterns that underlie sequences of sounds, a memory capacious enough to process complex mental structures, a facility with symbols, an agility of tongue, a perceptual system tuned for minute speech differences, and perhaps others we have yet to discover.

Julie Sedivy has taught linguistics and psychology at Brown University and the University of Calgary, and is the author of Language in Mind: An Introduction to Psycholinguistics. She is currently writing a book about losing and reclaiming a native tongue.