The Man Who Played with Absolute Power - Issue 45: Power - Nautilus

In his 2008 TED Talk, Philip Zimbardo introduced his subject by showing his audience M.C. Escher’s Circle Limit IV, a set of black…

In his 2008 TED Talk, Philip Zimbardo introduced his subject by showing his audience M.C. Escher’s Circle Limit IV, a set of black and white tessellated angels and demons. The art, Zimbardo explained, reminds us that “good and evil are the yin and yang of the human condition.” Neither are ever very far away.

Zimbardo rose to fame in 1971 with his Stanford Prison Experiment, in which students role-played guards and prisoners. The experiment was scheduled to last two weeks, but ended within six days after the guards began to abuse the prisoners, some of whom experienced mental breakdowns.

Even Zimbardo himself played a key role in the power structure. “In the experiment, I had ultimate power,” Zimbardo tells me. “I was the one ultimately that intervened and stopped it, [but] I could have intervened, and I should have intervened earlier.” The temptations of power can change an individual, he said—something that, no doubt, was on his mind when he testified in defense of Ivan “Chip” Frederick, a United States Army Reserve Staff Sergeant charged in the Abu Ghraib prison scandal.

In the years since the experiment, Zimbardo has become increasingly interested in positive psychology, and founded a non-profit organization that promotes everyday heroism and kindness.

Zimbardo spoke with Nautilus in December. 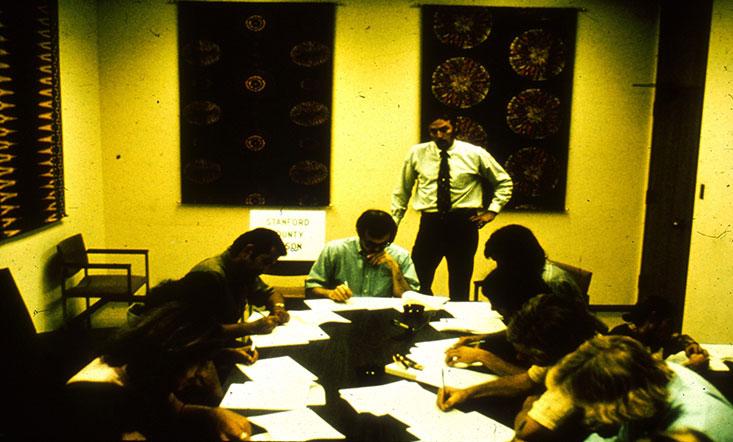 What sparked your interest in power?

My interest in power comes from having grown up in the ghetto in the South Bronx. One of the fundamental aspects of being poor is you have virtually no power. If you are rich you have money-power; you have social connections, people-power. If you’re poor, you have neither. I’ve always been interested in that. For me, education was a form of power.

How do you define power?

Power is the force that makes things happen, for good or for evil. It can be an inner power like compassion or external like status or wealth. Power is central in my view of evil—that people harm, hurt, and kill other people, in various ways. So in the prison study, power is a central theme because guards have to convince prisoners they have almost total power over the prisoners’ lives.

What interested you in designing the Stanford Prison Experiment?

The Stanford Prison study, in a sense [was designed to give] a broader sense of situational power. What it means to be a prison guard is to demonstrate to prisoners that you have power of all kinds over them, and they have virtually none. Also, I wanted to have a situation that went on as it does in real life, 24 hours a day, day after day, observing up close and personal character transformations as people got into, and ultimately became, their role. 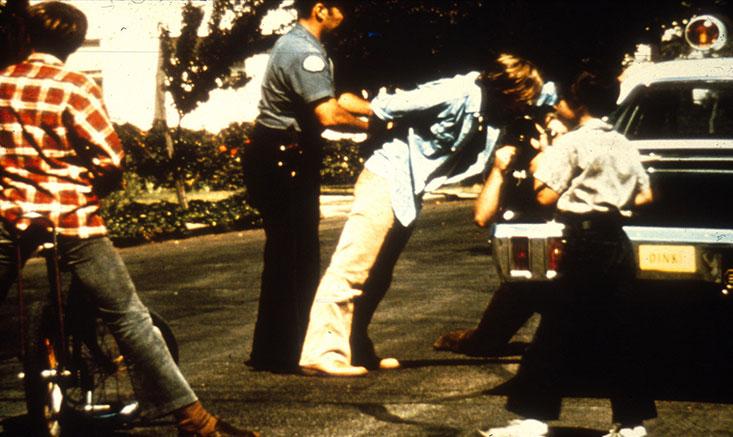 it begins: A prisoner gets arrested during the Stanford Experiment.Prisonexp.org

How did you ensure that the students you recruited weren’t already bullies?

Seventy-five college students answered an ad in the Palo Alto newspaper. We gave them a battery of personality tests and then randomly assigned two dozen who were the most psychologically healthy to either play the role of prisoner or guard. Any other background factors were equally dispersed between those two roles.

Did subjects try to resist their roles as prisoners or guards?

They did. We did things that made it very realistic: parole board hearings, parents visiting. But students in 1971 were anti-war activists. Many students on many campuses protested against the war, were beaten up or suffered abuse by their local police. So nobody wanted to be a prison guard. Initially, it was very difficult for the boys playing prison guards to get into their role. But, the second day of the study, the prisoners rebelled. They did not want to be dehumanized, because one way to take away power is to take away your name, your style, the way you wear your hair and so forth.

How did the guards react to the rebellion?

All 12 guards came in, and they crushed the rebellion. At that point, the guards said, “These are dangerous prisoners. We have to show who is in charge, who is the boss.” That changed everything. That’s when it became a prison. No one used the word “experiment” again. The guards used physical force—stripped the prisoners  naked, put them in chains, put them in solitary confinement. There was actually fighting. The guards used psychological force to make prisoners feel helpless and hopeless. That’s when I should have intervened and did not.1 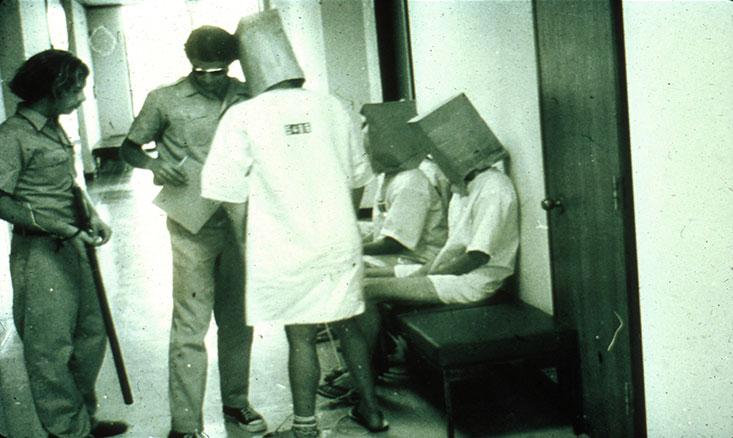 dehumanization: Awaiting parole board hearing at the Stanford Experiment.Prisonexp.org

Was Abu Ghraib similar to the Stanford Prison experiment?

Abu Ghraib was the Stanford Prison Study on steroids. The guards worked 12- to 14-hour shifts and never left the prison. Abu Ghraib was always under bombardment, so the guards lived in prison cells. That means they were totally enmeshed in that situation. Many of the prisoners were naked because they didn’t have enough uniforms; many of them were filthy because they were not enough showers; none of them spoke English; the Iraqi policemen were smuggling drugs in and helping prisoners escape; and the prison was under bombardment. This was a nightmare situation in which to be a guard.

In addition, they had 12 hours to kill every night. What happened was they began to use prisoners as their playthings to break the boredom up. The prisoners were naked, or they stripped them naked, then it just got worse. Every guard on the shift did degrading things to the prisoners; the abuses went on for three months. When you have the power, you use the boredom in whatever way you want. Lynndie England, one of the female guards said, “We were having fun and games.” They didn’t think anything they were doing was wrong.

What role did the guards’ bosses play in Abu Ghraib?

There were zero abuses on the day shift—100 percent of the abuses came on the night shift. That is the clearest situational variable in history. There was never an instance where a senior officer ever went down to the basement to see what was happening. They gave the guards unlimited power with no supervision. Power without limit is a recipe for evil and disaster.

I’ve done research, at New York University in the late 1950s, where you put female college students in hoods and make them feel anonymous. You give them permission to have power over other women by shocking them, and they give twice as many painful shocks as other women who are made to feel individuated. De-individuation and anonymity are key factors in people feeling they have power over others.

The Internet has anonymity. We see this in cyber bullying, we see this in people stepping out of their usual persona to become something different. We have evidence about Russian hackers influencing the American presidential election by putting out lies about Hillary Clinton and influencing some of the Democratic Congressional races. Many people have come to believe in the reality of the Internet, the acceptability of the Internet as gospel. The Internet has incredible power now, for good or evil. What we’ve seen in the Trump election is how it has been used for evil. 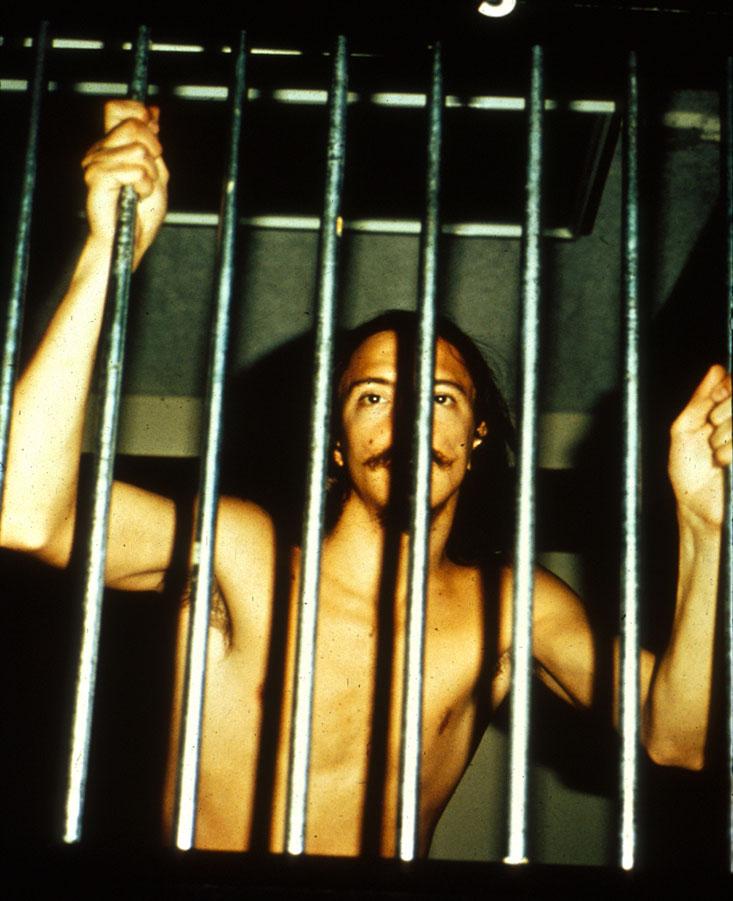 Particular physical settings have their own set of functional rules: When in that situation, the situation says, “These are the rules. This is what you do, and if you want to play the game, you have to do it when you’re in this situation.” There’s no indication that prison guards in Abu Ghraib did terrible things in the other 12 hours a day. It becomes very specific, focused, localized. You walk into that classroom, that prison, those corporate headquarters, and in that physical setting, that determines your behavior, sets the boundaries of what you do there and then. In many cases, it’s only there and then. You leave it, you go home. You sell terrible mortgages or loans—we’ve seen cases of economic crash, where people did this in that setting, and then could go to church, be a good father, good husband.

What is the goal of the Heroic Imagination Project?

We can recreate situations so they encourage compassion, caring, kindness, and heroic action by making explicit use of the same psychological principals, only now twisting it for good rather than for evil. Teaching people, for example, that instead of being passive, inert bystanders, you can become active, wise, effective heroes. Instead of having a fixed, narrow mindset, you have a dynamic growth mindset. With my team, we developed a set of educational lessons based on social psychology and the power of the situation, only now we teach in every lesson situational awareness.

If you could re-do the Stanford Prison Experiment, what would you have done differently?

Matthew Sedacca is an editorial intern at Nautilus.