“You’re not going to be jeté-ing across Central Park in the snow,” but you are going to move and be with other dancers.

“You’re not going to be jeté-ing across Central Park in the snow,” but you are going to move and be with other dancers. 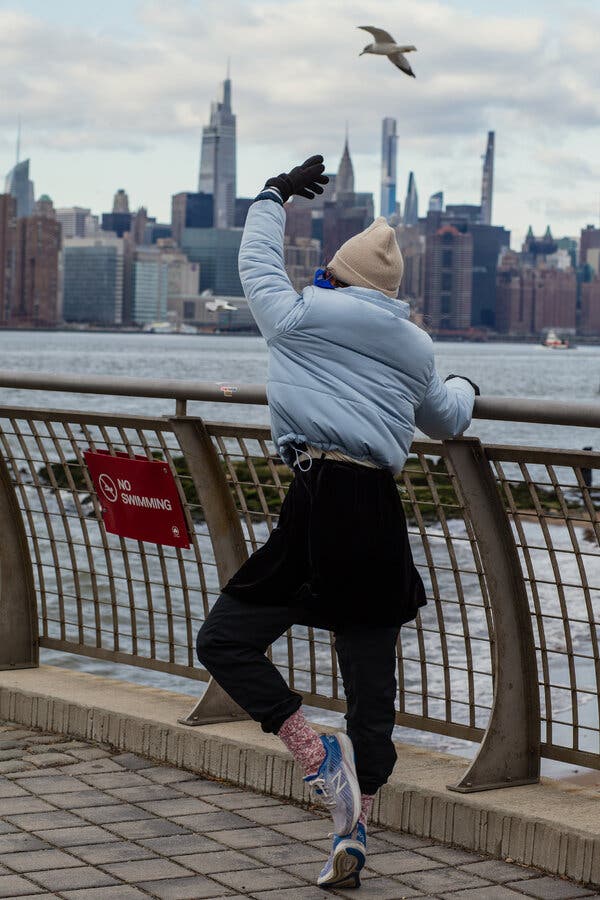 Once a week, Amelia Heintzelman puts on two pairs of socks, two pairs of pants and two coats, and ventures out to dance rehearsal from her home in Ridgewood, Queens. Carrying only a few items like her phone and keys, so as not to further weigh herself down, she jogs three and a half miles to the edge of the East River in Williamsburg, Brooklyn. For the next two hours, she’ll be dancing outdoors, and the bundled-up run generates much-needed heat.

“I’m really warm by the time I get there,” she said in a phone interview. “I try really hard to continue moving and keep that up.”

Heintzelman, 27, is part of a group of dancers who gather at Marsha P. Johnson State Park, on the Williamsburg waterfront, for a weekly class and rehearsal. Organized by the choreographer Phoebe Berglund, who leads a ballet barre warm-up in white jazz sneakers and a big blue parka, the group started taking shape in August and has continued to meet regularly, even as mild days have given way to harsher weather. (For safety and style, the dancers wear matching blue satin masks embroidered with the letters PBDT, for Phoebe Berglund Dance Troupe.) 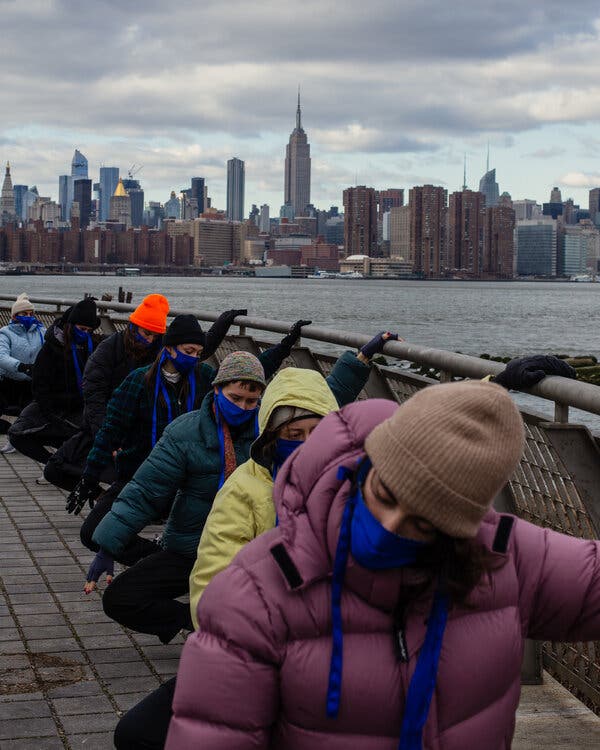 After theaters and studios shut down in New York in the spring, leaving many dancers with nowhere to train but their living rooms, the summer and early fall brought an eruption of outdoor dance, with classes and rehearsals popping up in parks and other public spaces. (Some indoor studios reopened, but with limited capacity.) When temperatures began to drop, outdoor activities tapered off. But even in the depths of winter, some artists and teachers have persisted in bringing people together to dance — in person — in the safety of the open air.

In this new landscape of outdoor dancing, ballet classes, normally held in studios equipped with barres and sprung flooring (good for jumps), have proved especially tenacious. Across the city, amateur and professional dancers are donning sneakers, masks and lots of layers to carry on with a familiar ritual that, for many, is essential to maintaining physical and mental health. While Berglund’s class is intended for the dancers in her troupe — preparation for their rugged rehearsals — other classes are open to the public and have drawn loyal, adventurous followers. 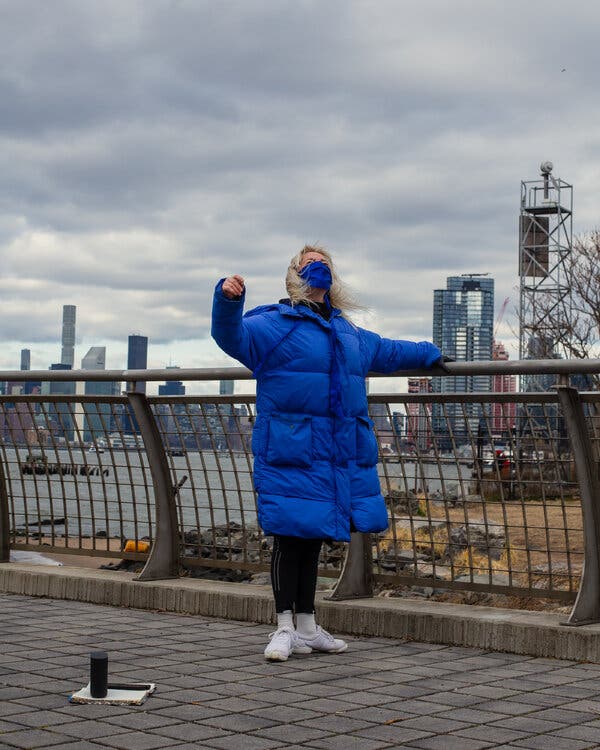 On Sunday afternoons in Central Park, along the path overlooking Wollman Rink, the veteran ballet teacher Kat Wildish offers an hourlong class with live music, welcoming anyone who feels moved to join in. In Carl Schurz Park on the Upper East Side, Dianna Warren holds an all-levels class on Saturday afternoons. (She suggests having some ballet experience but mostly “an open mind.”) And at Brower Park in Crown Heights, Brooklyn, Katy Pyle — the founder of Ballez, a body-positive, queer-friendly ballet company and class — teaches Pro Sneaker Ballez, a 90-minute session for advanced dancers, once a week.

On excessively cold or wet days, these classes are typically postponed or moved to Zoom, the virtual site of so much pandemic-era dance training and rehearsing. But for the most part, they have endured without interruption, a consistency that speaks to dancers’ desire to be physically present together, not cooped up in their apartments or separated by screens.

“Being with other dancers is the most rewarding thing about being a dancer,” said Anna Rogovoy, 29, who began attending Pyle’s outdoor class in January. She had tried taking classes online in her studio apartment but found that the lack of space — combined with a fear of disturbing her downstairs neighbors — was eroding her love of ballet, a form that, for her, has nothing to do with staying quiet or small. 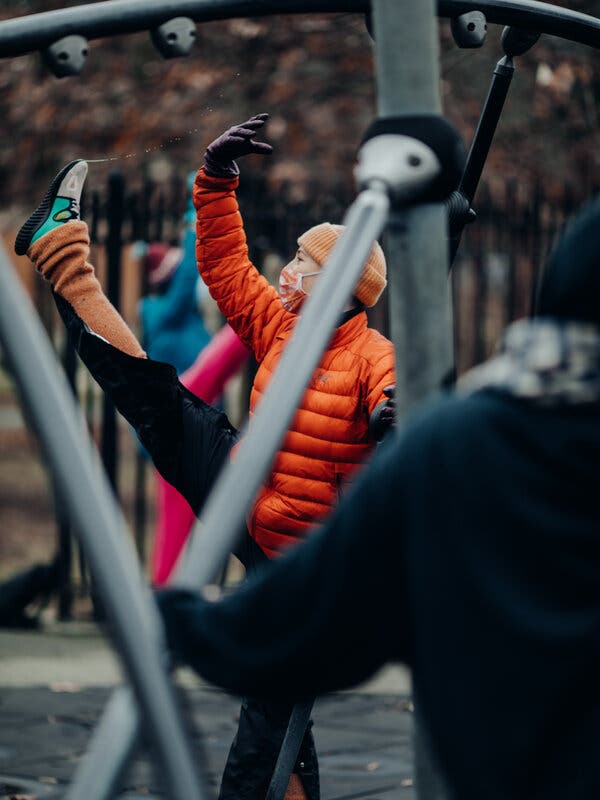 “I don’t love ballet to do little nitpicky exercises,” she said. “I do all of those things so that I can explode in space and lose control and be surprising and find new boundaries in my dancing.” Until taking Pro Sneaker Ballez, which culminates in grand allegro (the leaping part of class) across a basketball court, she hadn’t jumped in five months. When she finally did, she rejoiced. “Even just doing 16 changements” — small jumps in place — “I could have cried,” she said.

Pyle, who uses the pronoun they, began teaching outdoors in late June, after months of leading classes on Zoom (which they continue to offer) and dancing alone on an empty handball court. It was Pride month, and Pyle wanted to connect with their community through dance. 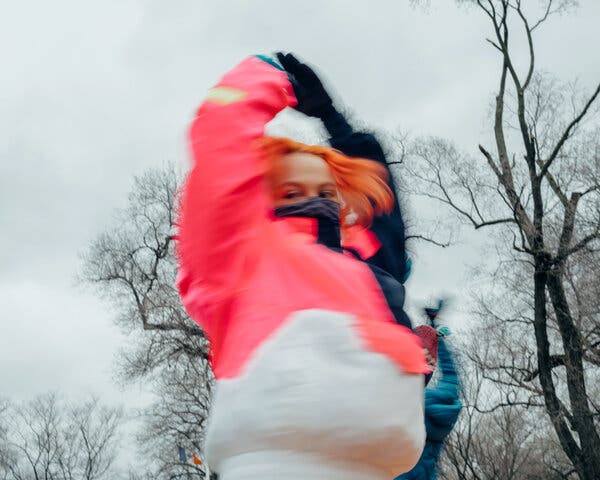 As the weather got colder, Pyle gauged students’ interest in continuing to dance outdoors. “Everyone was like: ‘Let’s keep going! I want to keep going!’ We joked about getting snow suits or sponsorships from REI.” (That didn’t happen, but Pyle has become “a firm believer in a base layer of wool.”)

For Wildish, too, enthusiasm from students has helped to sustain her outdoor classes, which she has held almost every Sunday since April, on top of a busy online teaching schedule. “Everything comes back to the dancers,” she said, speaking via Zoom with Sean Pallatroni, who plays for the class on a battery-operated keyboard that he wheels to Central Park. “They are really hard-core.”

Ballet on pavement, in any weather, requires some adjustments. Wildish notes that it’s harder to articulate the feet in sneakers (as opposed to soft ballet slippers), and jumping too vigorously on concrete can cause injury. James T. Lane, 43, a Broadway performer and a regular at the Central Park class, said he does fewer jumps and turns than he would in a studio, to protect his body.

Snow adds another challenge. Lane was among those who showed up to the barre — a sturdy railing above the skating rink — after a heavy December snowfall. He remembers clearing out space for his feet and commencing with pliés, focused less on achieving perfection than on the spirit of communal movement. 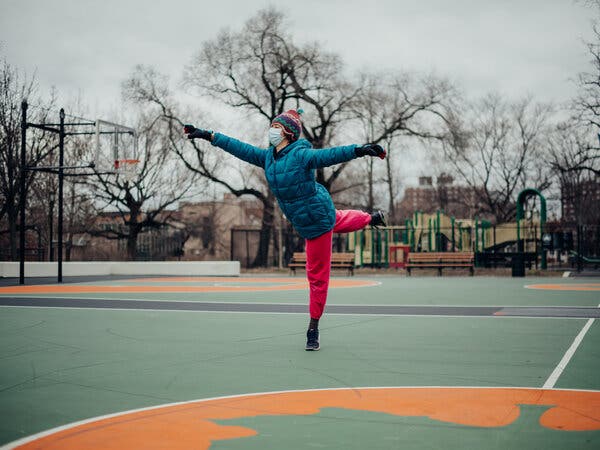 Berglund, too, is undeterred by snow. Having grown up in Newport, Ore., a fishing town that she describes as “cold and gray year-round,” she embraces dancing with the elements.

“Ronds de jambe in the snow? Boom. You’re just gliding,” she said, referring to a barre exercise in which the foot traces half-circles on the ground. On a recent blustery day, the wind gave the dancers momentum for a series of chaîné turns, as they whipped across an open stretch of pavement. 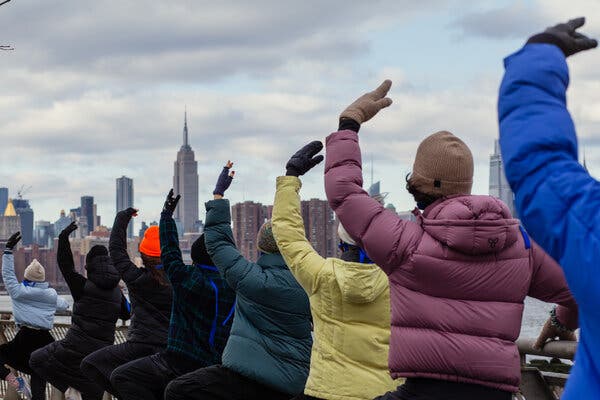 During her Saturday classes at Carl Schurz Park, Warren also finds herself appreciating nature. She began teaching outdoors in June, while regaining strength after a severe case of Covid-19, which left her weak for months. The final portion of class — a moment for giving thanks, known as reverence — has felt “more sacred” than ever, she observed, as the dancers bow before a sweeping view of the East River.

“It’s like you’re offering yourself out into where that water is, and into the air,” she said. “It’s full of grace and gratitude for your body, for your community, for your fellow dancers, for New York City, for the world — for just being able to still be here, being able to dance.”

HOW To TAKE The Classes

For updates about the public classes in this article, follow @ballez.company, @wildkatnyc and @diannawarrendance on Instagram. Email [email protected] to join the Ballez class email list.