When it comes to quantum mechanics, confinement is not necessarily bad. 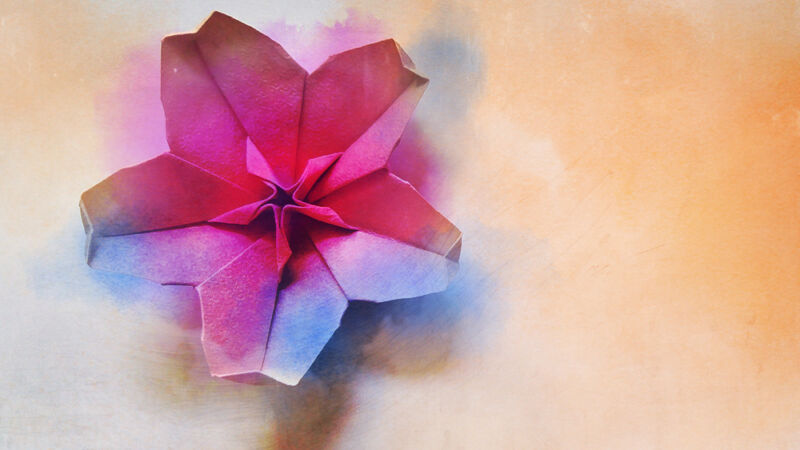 One of the quietest revolutions of our current century has been the entry of quantum mechanics into our everyday technology. It used to be that quantum effects were confined to physics laboratories and delicate experiments. But modern technology increasingly relies on quantum mechanics for its basic operation, and the importance of quantum effects will only grow in the decades to come. As such, physicist Miguel F. Morales has taken on the herculean task of explaining quantum mechanics to laypeople in this seven-part series (no math, we promise). Below is the fifth story in the series, but you can always find the starting story plus a landing page for the entire series thus far on site.

Sung to the abbess’s lines in “Maria" from The Sound of Music:

Through our expeditions into the wilderness of quantum mechanics so far, we’ve seen particles that are wild and free. But most particles spend their lives in more constrained circumstances: electrons caught in the embrace of nuclei, atoms shackled into molecules, or the regimented lines of crystals. Confinement is not necessarily bad—only strings tightly tied into a musical instrument can make music.

In today’s hike into the quantum-mechanical woods, we are going to carry along some traps so we can see how particles behave when you confine them. (Being sensitive sorts, we’ll treat them kindly and release them when we’re done.) In the process, we’ll discover the origin of emission spectra from stars and encounter artificial atoms and quantum dots, which play leading roles in everything from quantum computing to consumer televisions.

Why the caged bird sings

As we’ve seen a number of times, all particles move like waves. But what happens when we trap a wave? How does a particle’s behavior change when we confine it?

A great everyday example of a trapped wave is a guitar string. Before being attached to a guitar, a string can wiggle any way it feels like. Fast waves, slow waves—every kind of wave is possible. But when we tie the string to a guitar and pluck it, the resulting wave is trapped by the ends that are attached to the guitar. The wave can bounce between the ends, but it can’t escape.

Enlarge / The trapped waves of a guitar string. Clockwise from upper left are the fundamental, 2nd harmonic, and 3rd harmonic of an open string. Only waves that fit neatly in the trap are allowed, and the increasing frequency is associated with higher energy (higher pitch). We can also shorten the trap by using one of the guitar’s frets, which changes the frequency of the fundamental (lower left) and all the harmonics.

As shown in the diagram above, some sets of waves (harmonics) are allowed, but only waves of the right length are possible. When we trapped the wave, we went from any note being possible to a state where only those waves that fit within the trap—and the notes they correspond to—can exist. In other words, the pitches of the guitar string are caused by the trap. And when we put a finger on a fret to change the size of the trap, the size of the waves that fit changes, and the notes we hear change. 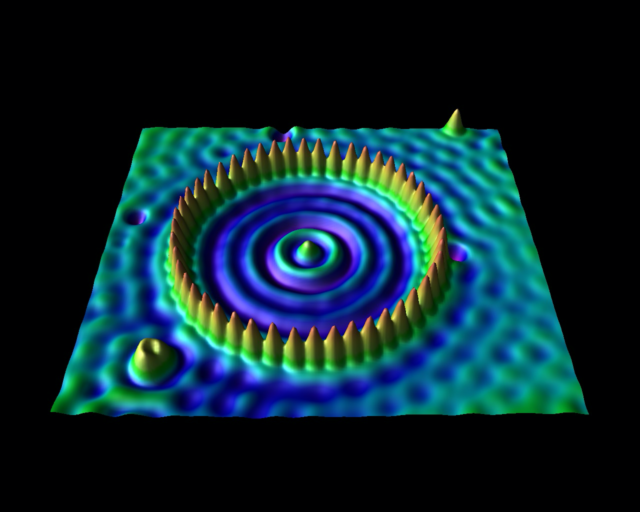 Enlarge / A circular corral of 48 iron atoms (sharp peaks) on a copper sheet. The wave of an electron trapped inside the corral can be clearly seen.

Since particles move like waves, they respond just like any other kind of wave when caught—they sing with specific notes. The electron in the quantum corral looks like the vibrations of a drum head. That is not an accident: a drum also creates a circular trap for waves analogous to the quantum corral. The observation that quantum particles pick up specific notes when trapped is a consequence of them moving like waves. So by catching particle waves, we can make music.