Scientists with Fermilab recently announced the successful measurement of quantum spacetime at the smallest imaginable scale in known physics, known as the Planck length.

According to quantum mechanics, everything is continuously fluctuating on microscopic scales. However, when measuring quantum matter on the Planck-scale, scientists discovered that quantum spacetime is perfectly still in the smallest region possible.

While considerable unknowns remain, gaining a better understanding of quantum spacetime’s bizarre world could be a significant step to understanding the very fabric of reality and why things happen at definite times and places.

Underscoring the significance, in an interview with The Debrief, Fermilab scientist and co-author of the recent study, Dr. Craig Hogan, said, “Literally everything is made of quantum stuff. So understanding the quantum world is really about understanding everything.” 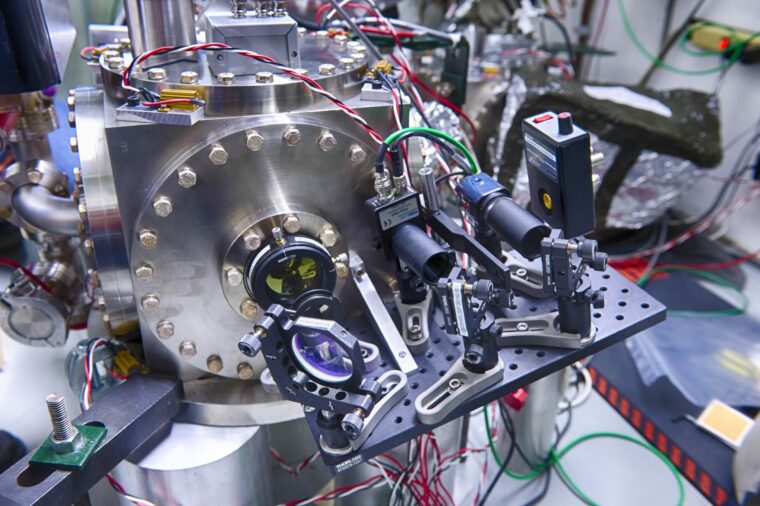 A close-up of the Holometer at Fermilab, an experiment designed to test the information storage capacity of the universe, and determine whether we live in a 2-D hologram. (Image Source: Fermilab)

While classical physics works to understand the observable world, quantum physics examines nature’s physical properties at the scale of atoms and subatomic particles.

Since discovering quantum properties, physicists have been stumped by the fact that general relativity and the classical notions of space and time fall apart whenever properties are examined on the quantum scale. One of the best known examples of the mysterious conflict between the macroscopic and quantum worlds is the double-slit experiment.

First discovered in the early 19th Century by British polymath Thomas Young, the double-slit experiment demonstrates that particles, such as electrons, atoms, and molecules, can simultaneously display characteristics of both being waves and particles. Subsequent investigations have confirmed this bizarre phenomenon over the decades, demonstrating the impossibility to explain quantum phenomena by classic observable physics.

Many quantum phenomena are so strange and counterintuitive that even Albert Einstein never entirely accepted quantum theory. He called quantum entanglement–the linkage of particles in such a way that measurements performed on one particle seem to affect the other–“spooky action at a distance.”

“Einstein said that if quantum mechanics were correct, then the world would be crazy. Einstein was right, the world is crazy,” quantum physicist Daniel M. Greenberger famously said. 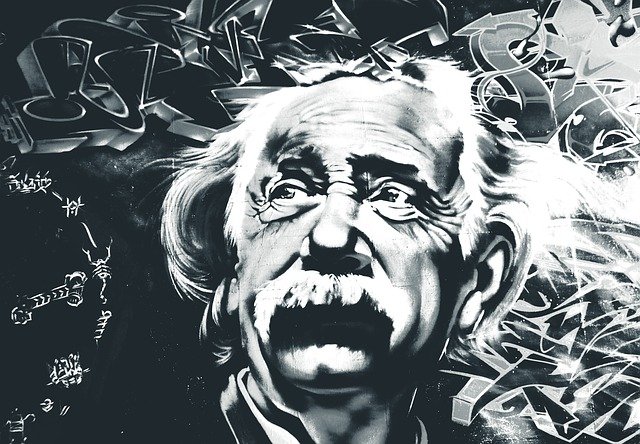 Currently, Planck length is the shortest distance in spacetime due to the impossibility of observing anything smaller. For comparison, a grain of sand would seem like the entire universe’s size compared next to the just 10-33 centimeter size of Planck length.

While our current understanding of quantum mechanics says that everything is continually wavering on incredibly small scales, measuring Planck-scale jitters has long been considered too small to study in any experiment. Nevertheless, several years ago the U.S. Department of Energy national laboratory Fermilab set out to try and achieve the impossible and measure matter on this unthinkably small scale, building a device called the Holometer.

Using an ultra-sensitive laser interferometer, the Holometer can detect holographic fluctuations in quantum spacetime. As laser light passes through an arrangement of mirrors in the Holometer, the mirrors can show minute jitters of matter, or quantum-geometrical fluctuations. Physicists call this property of spacetime “holographic” noise.

Initial experiments with the Holometer in 2016 discovered that, rather than detecting the expected jitters of matter being carried by quantum-geometrical fluctuations, quantum spacetime was entirely still. Looking to confirm these initial results, researchers rebuilt the Holometer to be even more sensitive, capable of detecting random changes in direction at a million times a second, and jitters moving at only one billionth of a billionth of a meter. 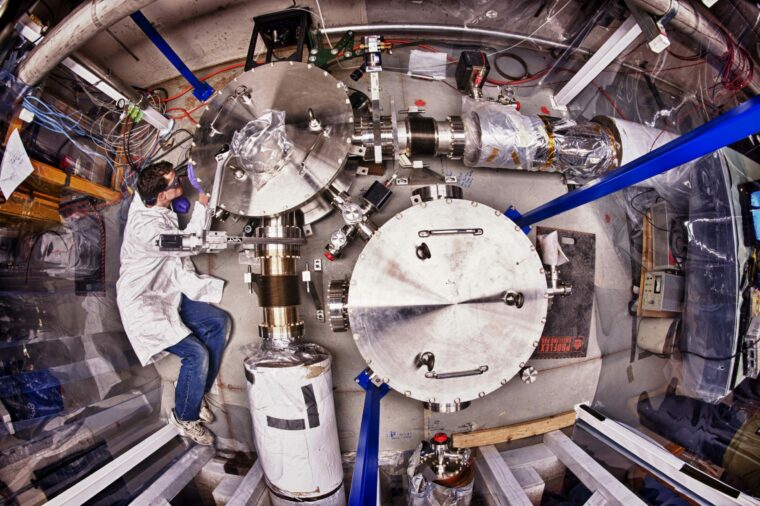 This overhead view shows the two vacuum vessels that will contain beam splitters for the two interferometers of the Holometer (Image Source: Fermilab)

Analysis: How Quiet is Quantum Spacetime?

Recently completing final experiments with the reconfigured Holometer, the Fermilab team of scientists once again found quantum spacetime at the Planck scale is perfectly still. “Our final result is again no jitters, which can be interpreted as no Planck-scale twists, of a certain kind, in the fabric of spacetime. It seems spacetime at the Planck scale is very quiet indeed,” said Dr. Hogan in a statement provided by Fermilab. Results of the study were published in the journal General Relativity and Quantum Cosmology.

While scientists were able to confirm their initial results regarding quantum spacetime’s inactivity, precisely what this means in the grand scheme of things isn’t entirely clear.

Since the Holometer program was exploratory and no rigorous quantum spacetime theories exist, researchers currently lack a unique way to interpret the null results. The potential exists that jitters may still exist, yet they are on an even smaller scale than current physics can measure. At the Planck scale, matter may contain symmetry that creates a pattern in space not yet discovered.

“It’s fair to say that no theory actually makes a rigorous prediction for our experiment. You can make guesses, but nobody knows the ‘phenomenology’ of quantum gravity. The lack of jitters rules some of those guesses,” Dr. Hogan told The Debrief. “The frontiers of physics are often like this. A similar situation is the search for dark matter— nobody knows what is made of, so the searches for dark matter particles and waves are made based on educated guesses.” 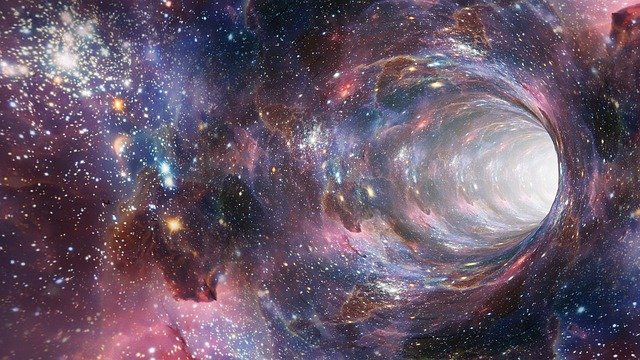 Outcome: What Does it Mean and What Comes Next?

Given its inherent obscurity and microscopic magnitude, it’s easy for the average person to consider quantum science an esoteric, almost philosophical, pursuit. However, as Dr. Hogan pointed out, not only is everything literally made up of “quantum stuff,” but advances in quantum mechanics are all around us and continue to have an exponential impact on everyday life.

“These days, examples are all around us. ‘Electronics’ are even named after electrons! New fancy quantum tech makes its way into our everyday lives pretty quickly these days, from batteries to displays to memory to processors,” said Dr. Hogan.

The Debrief has reported numerous significant developments in quantum engineering, including another team of scientists from Fermilab who recently achieved the first-ever successful demonstration of sustained, long-range, high-fidelity quantum teleportation. Additionally, scientists with Army Research Labs announced this month they had built a quantum sensor capable of detecting the entire radio spectrum, a significant step toward developing quantum electronic warfare.

Dr. Hogan says that emerging technologies will enable future experiments, possibly better than those performed with the Holometer, to be conducted. “The technology for the next generation of these experiments is being developed elsewhere, especially at Cardiff. It will take some years to move to the next stage in the lab.”

While new methods for examination are being developed, Dr. Hogan points out other ways physicists can study quantum spacetime. “We’re currently looking at evidence from cosmology: certain symmetries are seen in the pattern of primordial temperature perturbations in the cosmic microwave background, which might have been created by holographic effects in the very early universe.”

Similar to other recent discoveries–such as the existence of sealife deep beneath the Antarctic ice where no life was previously believed to exist or any number of new revelations NASA’s Perseverance Rover may bring–the measurement of quantum spacetime and discovery of its stillness serve as pervasive reminders of the life’s limitless mysteries still waiting to be solved.

Discussing quantum science’s place in life’s great mysteries, “This gap in understanding has been around for a century, ever since quantum physics was invented. It’s certainly related to another deep unsolved mystery on the largest scales of space and time, the acceleration of the cosmic expansion,” said Dr. Hogan. “I’m optimistic about connecting these things in the next decade. Solving the mystery of life may take a little longer!”