Opinion | Biden Should Finish the Wall

… Or the next Trump will.

Opinion|Biden Should Finish the Wall

… Or the next Trump will. 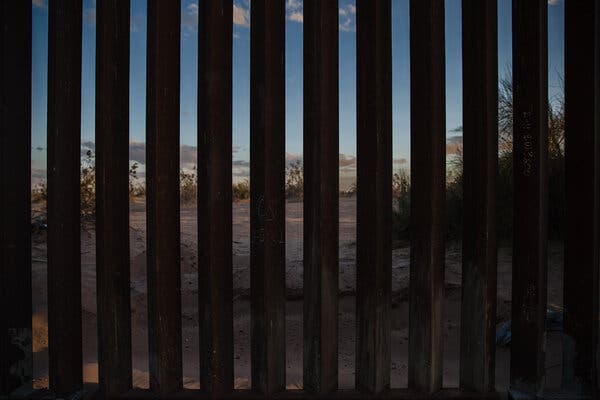 The most harrowing story I’ve read in The Times in recent days was Miriam Jordan’s account of a car crash last month in Southern California involving a Ford Expedition that had come from Mexico, straight through a breach in the border wall. The Ford was crammed with 25 people when it hit a tractor-trailer rig on Route 115, 110 miles east of San Diego.

“Few of the survivors have been able to describe what happened next,” Jordan writes. “The crunch of metal and glass, the bodies flung dozens of feet across the pavement. Twelve people died on the spot, a 13th at a nearby hospital.”

Jordan follows the stories of the victims and survivors, and there’s a heartbreaking sameness to them: people who have been driven by fear or want from their homes in Mexico and Central America, and who are willing to take grave risks and pay exorbitant sums to make it to the United States. These are not terrorists, gang members, lowlifes, benefit seekers or — except in their willingness to violate U.S. immigration laws — lawbreakers. They are seekers of the American dream, worthy of our compassion and respect.

Yet those 13 people — along with others who have recently lost their lives in dangerous crossings — might not have met their grisly fate if the Biden administration’s concept of compassion wasn’t also an inducement to recklessness.

And they would not have been killed if a wall had been standing in their way.

That’s a conclusion I’ve come to reluctantly, and not because I’ve abandoned my disgust with Donald Trump. Walls are ugly things: symbols of defensive, suspicious, often closed-minded civilizations. Walls are, invariably, permeable: Whatever else a border wall will do, it will not seal off America from unwanted visitors or undocumented workers — roughly half of whom arrive legally and overstay their visas.

Walls also cannot address the root cause of our immigration crisis, which stems from a combination of social collapse south of the border and the pull of American life north of it.

But a well-built wall should still be a central part of an overall immigration fix. It’s an imperfect but functional deterrent against the most reckless forms of border crossing. It’s a barrier against sudden future surges of mass migration.

It’s also a political bargaining chip to be traded for a path to citizenship in a comprehensive immigration-reform bill. And it’s a prophylactic against the next populist revolt, which is sure to overtake our politics if the Biden administration cannot competently control an elementary function of governance.

That deterrent is needed now. U.S. agents apprehended 170,000 migrants along the southwest border in March, a 70 percent jump over February’s numbers and the highest level in 15 years. Notwithstanding the administration’s claims to the contrary, there is a crisis, led by a massive surge in child migration spurred by President Biden’s promises of a more humane policy than his predecessor’s.

Some of this surge is seasonal. And some can be dealt with by building more shelters for unaccompanied minors and families, or speeding up the process of finding relatives or others who can take in unaccompanied children.

But the administration would be foolish to suppose the surge will recede on its own. The years of relative economic prosperity in Mexico that, for a time, led to a net outflow of Mexican migrants from the U.S. are over, thanks to a combination of drug cartels, a pandemic and the misgovernance of its inept populist president. Guatemala, Honduras, El Salvador and Nicaragua are failing states. A “Plan Colombia”-style package of security assistance could help. But it will cost billions and probably take a decade for its effects to be felt.

In the meantime, the United States risks a version of the European migration crisis of 2015. That’s the one that contributed heavily to the Brexit vote, turbocharged the rise of far-right parties like France’s National Front and the Alternative for Germany, and paved the way to Trump’s election.

There’s little question that our own migration crisis is a political boon for immigration restrictionists. The wonder is why a serious Democratic administration would aid and abet their cause.

It’s also putting the interests of comprehensive immigration reform further out of reach. Congress has not passed a significant immigration bill in over three decades. Joe Biden came to office with an opportunity to get a bipartisan accord, but no Republican will sign on to legislation that widens the doors to legal immigrants, much less one that offers some form of amnesty to illegal ones, without a serious plan for border security. Nothing accomplishes that more visibly than a wall.

For Democrats, that’s an opportunity to defuse the political bomb Republicans would love to plant right under them. And it’s a jobs-creating infrastructure program to boot.

Will a wall solve all of our immigration problems? Hardly. It will take years to build, and some practical, regulatory and legal hurdles might be hard to surmount. But for anyone who hopes for America to remain a proud nation of immigrants, it has to be a part of the solution.