A “no math” (but seven-part) guide to modern quantum mechanics

The double slits served two purposes: each slit spread the beam out (as we saw when we went through just one slit), while the two closely spaced slits provided the particles with a choice as to which slit to pass through. We can use a different experimental setup to more clearly separate the act of spreading the beam and forcing a choice, and this bigger setup will allow us to study in detail what is happening. (This is the moment in the cooking show where they pull out some obscure cooking tool—like a crème brûlée torch—that you’re unlikely to have at home.) 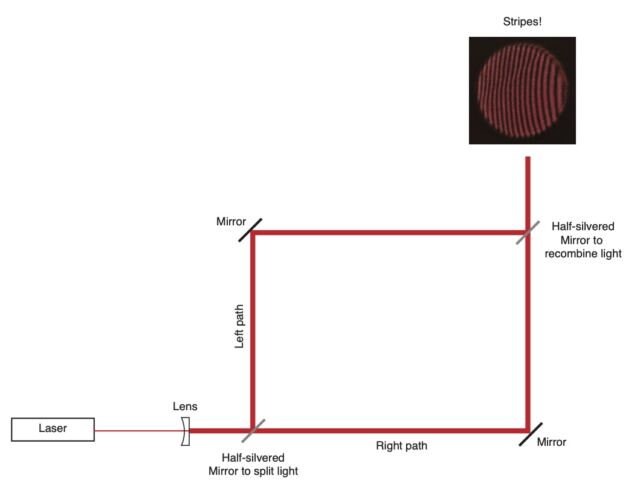 Enlarge / The professional version of the two slits in aluminum foil. Here the light beam is split by a half silvered mirror and sent into left and right paths. These paths are then recombined to show stripes.

Keeping the laser, let’s use a lens to spread the beam out, and then a half-silvered mirror to give the particles a one-way-or-the-other choice. We then use a couple of good mirrors and another half-silvered mirror to recombine the beams before they reach a wall or screen, as shown above. If one of the mirrors is mis-aligned ever so slightly, we will again see stripes (places where waves add together and cancel out). In the 38 second video below I show the working version.

What I find fun about this setup is that it is big. I don’t need a microscope to mess with it. For convenience, I made this table top sized, but we could have made it huge. In the LIGO experiment used to detect gravitational waves, the light is sent down arms 4 km long, and with radio light we’ve used the Cassini spacecraft as it approached Saturn as a mirror. Quantum mechanics is not limited to the microscopic world.

But let’s play with our human sized experiment, and see some more quantum mechanical effects.

The first thing I’d like to do is to look very carefully at the stripey pattern. Instead of just looking at the screen, let’s use a sensitive camera so we can watch it as it develops. When the laser is bright, the camera will immediately capture stripes. But if we make the room very dark and turn down the strength of the laser, we will notice that light is a not smoothly distributed, but appears at individual ‘points’—in slow motion we can see the arrival of individual photons. They look like small red paintballs hitting the camera sensor.

Since this is a video camera, we have a record of where the photons hit. If we play the video, it looks like we are watching someone make a pointillism painting. Individual spots are appear on the screen without an obvious pattern. If we keep where they landed lit up by summing the video frames, the spots start to fill in the stripey pattern we saw when we had the laser turned all the way up.

The stripy pattern is there, even if we only generate it one photon at a time.

Which way did he go?

If I block either of the paths, the stripes go away. The same thing happens with the aluminum foil if you block one of the slits with an index card (though this requires a very steady hand). We only see stripes if the light can travel both paths and interact before hitting the screen.

This gets even stranger if we turn down the intensity of the light. We can turn the laser down so low that only one particle of light is traveling through the experiment at a time. No matter how low we turn the light, the stripes only appear when each individual photon can take both paths. (Even if we limit it to one particle at a time as in the video above, the particles will slowly add up to the pattern seen above.)

If your head isn’t hurting yet, you’re not paying attention. But, it is important to register all of the markings on a strange bird before looking in the guidebook, so let’s look a little more closely before we explain what is happening. 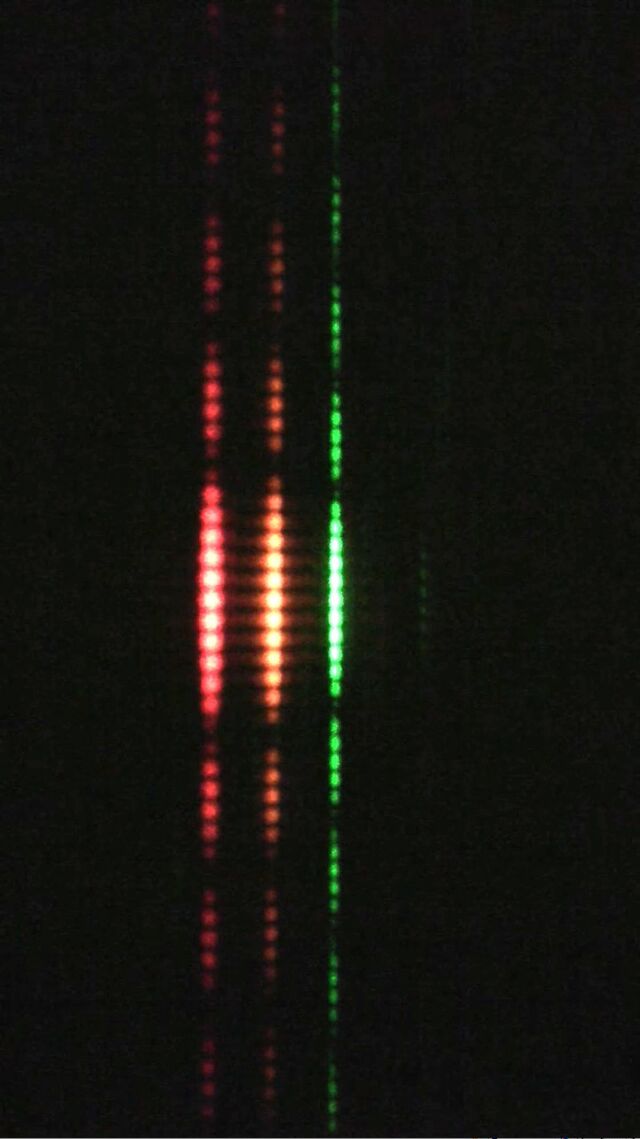 Enlarge / The stripes from sending red, orange, and green lasers through the same pair of slits. Notice how the green dots are closer together.

We can repeat these experiments, looking at the arrival of the photons in slow mo and blocking different paths, and everything works the same way with the exception of the stripes being closer together.

So what is happening?

The stripes we are seeing are a hallmark of waves. Sound waves and water waves both exhibit this kind of striping. If you have ever heard loud and quiet places at a concert or while listening to the stereo and walking around the room, you’ve heard the stripes of wave interference. You can recreate this experience by playing a single note from a synthesizer through a pair of stereo speakers. The two speakers act like the two slits in the aluminum foil; by moving your head left to right you can hear the loud (bright) and soft (dim) parts of the stripes (try a note a couple of octaves above middle C). We saw the same wave effect in water waves earlier.

As the pitch of the sound gets higher—or the water waves become shorter in length—the distance between the bright stripes will get closer, just like when we changed the laser color. And if we block the waves in one of the paths (by pulling the speaker cord on one of the speakers or stopping one of the sources of waves in water) the stripes will go away. All the experiments we did that tested how the particles moved from the laser pointer to the screen show that the particles move like waves.

However, we also saw the light hitting the screen like little paintballs. They hit at a spot and deposit a set amount of energy depending on their color. All of the experiments about how the particles hit the camera show that they behave like little ball bearings.

The immediate question is whether this is something special associated with light particles, or whether it is true of all particles. The short answer is it is always true. It is true for any kind of particle, under any circumstance, all the time. Photons, electrons—even molecules. Particles always move like waves and hit like particles.