Opinion | Can We Really Picture Auschwitz?

As memories of the Holocaust fade, one survivor’s images remain vivid. 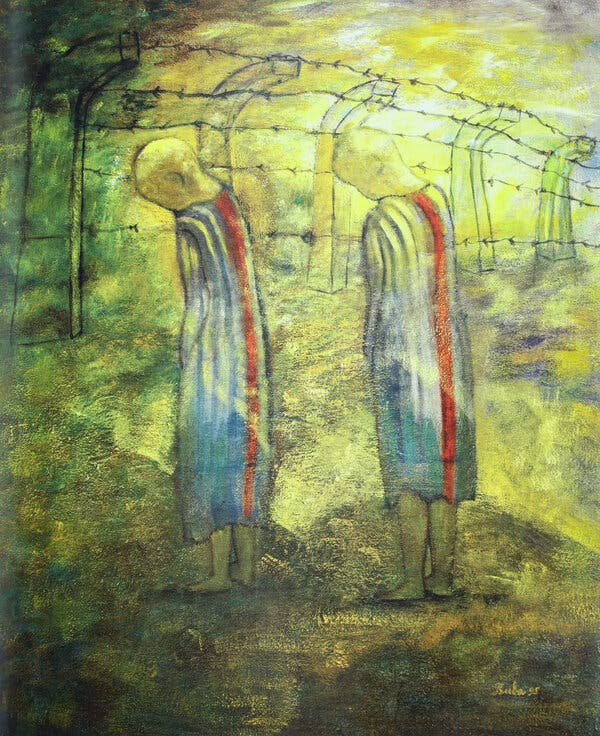 As memories of the Holocaust fade, one survivor’s images remain vivid.

When Buba Weisz Sajovits and her sister Icu arrived in Veracruz in 1946, their eldest sister, Bella, was waiting for them by the dock. Bella, who had been in Mexico with her husband from the 1930s, insisted that they were not to speak of what had happened to them in the war. Life was meant to be lived facing the future, not the past.

So Buba — her given name is Miriam but she has always gone by her nickname — lived life forward. She married a fellow émigré and concentration camp survivor, Luis Stillmann, whose story I wrote about last year. They had two daughters, then four grandchildren, then five great-grandchildren. She started a beauty salon, which thrived. They became pillars of the Jewish community in Mexico City. They prospered as they grew old. 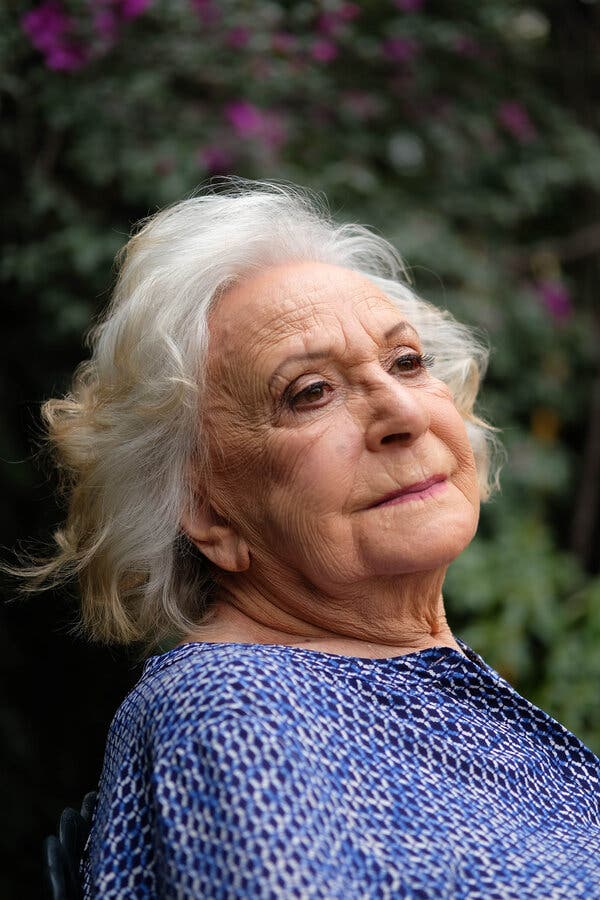 Only one reminder of the past could not be erased, because it was etched permanently in ink on the inside of her left forearm: A-11147. What went with that alphanumeric was, as she would title her memoir, “Tattooed in My Memory.” Decades later, when she was well into her 60s, she decided to take up painting, and soon the past became more vivid.

How can we really comprehend an event like the Holocaust, or a place like Auschwitz? I have a shelf of books dedicated to the question, from Hannah Arendt’s “The Jew as Pariah” to Elie Wiesel’s “Night.” I’ve also made the trip to Auschwitz, walked along the infamous rail tracks, toured the crematory, peered at the vast piles of shoes, the sickening mounds of human hair.

But there’s invariably a gap between what we know and what we understand — a gap that becomes much wider when there’s no chance of bridging the two through personal experience. We know that 1.3 million people, an overwhelming majority of them Jewish, were enslaved by the Nazis at Auschwitz, and 1.1 million of them were murdered, mostly in gas chambers. We have thousands of testimonials from the camp’s survivors and liberators, masses of documentary and photographic evidence, the autobiography and signed affidavit of its commandant. 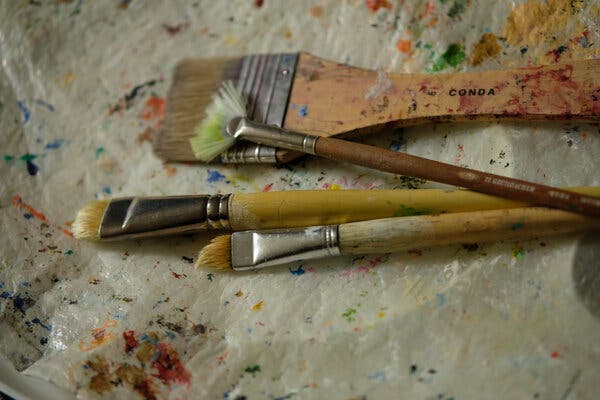 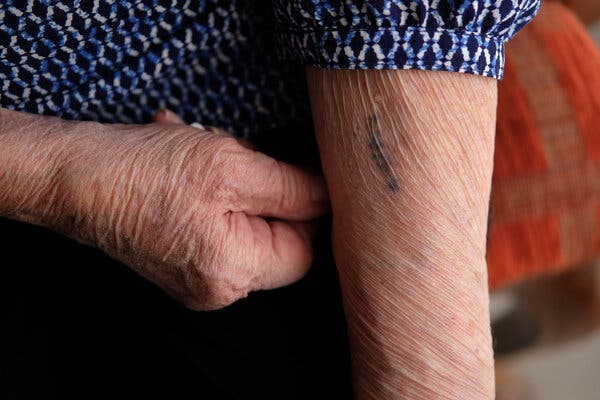 Yet as details accumulate, they numb as much as they inform. Information becomes statistical; statistics become abstractions. Personal memoirs, such as Primo Levi’s “Survival in Auschwitz,” restore the human dimension, but there’s always a zone of uncertainty between the written word and the reader’s imagination. Movies like “Schindler’s List” also bring to life the human element, but at the peril of semi-fictionalization. They can make Auschwitz seem less real, not more.

When Buba began to paint, “she couldn’t make a circle,” her daughter Monica recalled. “But whatever she did in life, she took to the limit and was good.”

In her Transylvanian hometown, Cluj-Napoca — or Kolozsvar to its Hungarian-speaking residents — she had been a champion sprinter at school. On May 31, 1944, she and Icu (pronounced Itzu_),_ their parents, Bernard and Lotte, and the rest of the Jewish population of Cluj were deported in cattle cars to Auschwitz, a journey of degradation and hunger that lasted five days. Buba, then 18, last saw her parents on the night of their arrival in the camp, when her father jumped out of line to hand his daughters their baccalaureate diplomas.

Buba was given a factory job. It came with extra rations, which she shared with her bunkmates. One day, she was called into a cubicle of the block elder, a female prisoner who was in charge of barracks discipline. The elder tore off Buba’s clothes and shoved her toward a man who had been waiting for her. 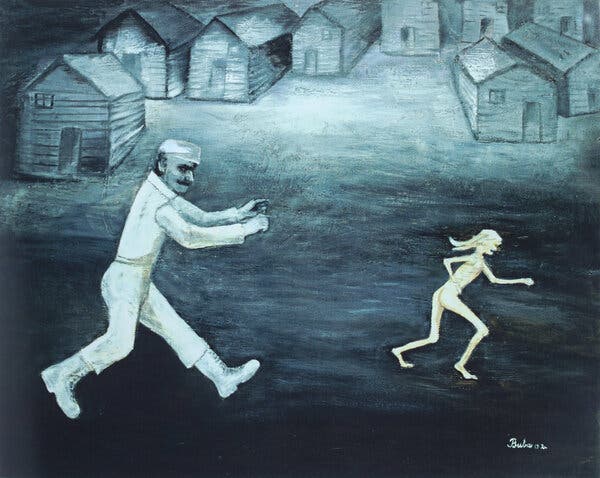 “I gathered every last ounce of strength that I could muster,” she said, “and ran.”

How can we understand what it’s like to be a half-starved, naked Jewish girl running for her life from an Auschwitz rapist? We can’t. I can’t. But in 2002, Buba painted the scene, and through her painting I could catch a glimpse of what it means to be the most vulnerable person on earth.

“Needless to say,” she added dryly, “I lost my job and my ration.”

When she was 14, Buba joined a school protest to object to the German diktat that Romania hand Transylvania over to Hungary. A classmate shoved her aside. “What are you doing here you dirty Jew? You’re not even Romanian.” In time, they were made to wear yellow stars, barred from public places, locked up at home and taken to the Cluj ghetto. Dehumanization was as much the precondition for Auschwitz as it was its outcome.

Fittingly, among the first German officers Buba remembers seeing at the camp was Josef Mengele. “With a posture more attuned to an opera,” she remembers, he hummed the melody of “The Blue Danube” while signaling for prisoners to file into one line or another. 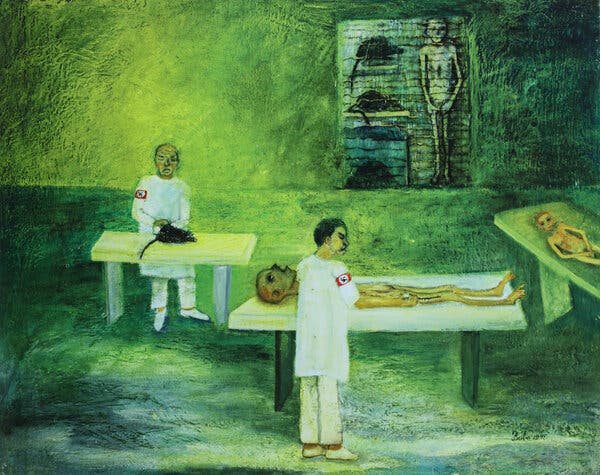 Icu was put in line with their mother, but their mother sent her back to join Buba’s line. Almost certainly without knowing it, Lotte Sajovitz’s last deliberate act in life would save her daughter from the gas chamber.

In an interview Buba gave in 2017 for the U.S. Holocaust Memorial Museum, she told of her other encounter with the infamous doctor. “We had to go to — I don’t know whether it was an office or a hospital — where Dr. Mengele worked. Cruel, like you have no idea. They lay us down, and I don’t have any idea what happened. It’s possible they put us to sleep. … What he got up to, I can’t say.”

Buba painted this, too, choosing, as she would say, “cold colors.” For all of its scale, the special evil of Auschwitz ultimately lay in the fact that the murder and torture was clinical, something I only really understood after seeing Buba’s painting. Notice the animals in the scene: They wear white coats.

Nine days before the Red Army liberated Auschwitz, Buba and her sister were among the 56,000 prisoners forced to march 35 miles in the dead of winter. As many as 15,000 of those who began the journey from Auschwitz died. The rest, along with Buba and Icu, were put on trains to Germany.

Even with the war all but lost, the Nazi determination to kill Jews didn’t stop.

“The SS had us form a single file,” Buba said of the march. “They eliminated one out of every 10 women. I ran toward Icu so that the same fate would befall us.”

It didn’t. She and Icu were liberated, from Bergen-Belsen, on April 15 by the British Army. No painting of Buba’s haunts me more than the one of her alone, her head in her emaciated arms, the barbed wire still in front, the chimney, still burning, not far behind. 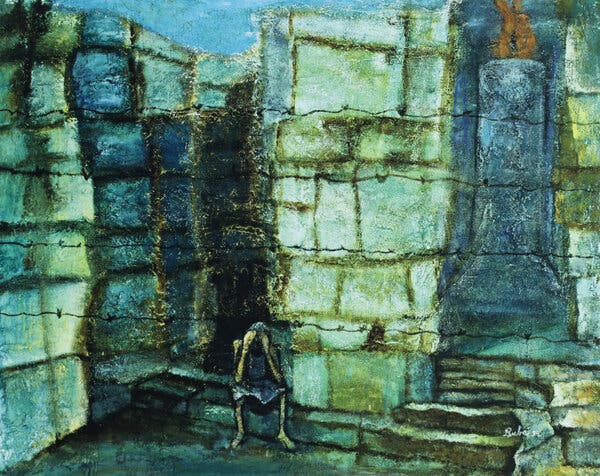 “I wondered what to do with my newly granted freedom,” Buba thought. “My world had been demolished.” What better way than this image to help me understand how little life could mean to someone who had lost so much?

Buba put down her paint brushes a few years ago. She is now 95, one of only 2,000 or so Auschwitz survivors still living. Her husband Luis, who survived Mauthausen, is 99. Both of them embody what, for me, it means to be Jewish: a member of a religion that cherishes life and memory alike, and believes that we live best, and understand best, when we remember well.

In this month of Holocaust remembrance, it’s worth pausing to consider how one brave woman’s memory, and art, help us to see what we must never forget.

The Times is committed to publishing a diversity of letters to the editor. We’d like to hear what you think about this or any of our articles. Here are some tips. And here’s our email: [email protected]s.com.